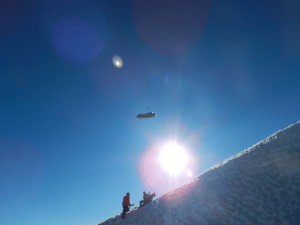 Joseph and Casey from Georgia were on an extending climbing tour of the West and along with two friends were excited to climb Mt. Hood. The groupbegan their ascent of the main Southern Route in the wee hours on Sunday, June 14, 2015. After making it to the summit, enjoying the spectacular view and celebrating the climb, they began their descent down One O’Clock Chute at the top of the Coleman Headwall. Disaster struck around 9:30 a.m. when a boulder broke loose above them. Casey was unable to move out of the way, and the boulder struck her leg, breaking it above her boot. Joseph knew she had to be moved from the dangerous chute, so he and other climbers rigged a rope system to raise her back to the summit ridge. They called 911 and requested a rescue.

Around 11:00 a.m. Portland Mountain Rescue was called out and rescuers headed for the mountain. At approximately 2:15 p.m., a team of five PMR rescuers loaded the chair lift and headed up the mountain. A team of medics from AMR headed up before them. One AMR medic reached the patient at approximately 4:300 p.m.; the PMR team reached her about one hour later.

Due to the patient’s location,condition and the hazard posed by extended exposure to rock and icefall on the headwall during a possible lowering operation, it was decided to request a helicopter evacuation. The Army National Guard was mobilizing a crew and aircraft for this possibility. The Black Hawk departed Salem at 5:15 PM and touched down at Timberline at 5:46 PM for an operational briefing. By 6:30 the helicopter was on its way to the summit. Upon arrival, it lowered a Medic and a litter.     The patient was packaged and hoisted into the helicopter around 7:00 p.m. and then flown to a Portland hospital. PMR rescuers assisted Joseph and a good Samaritan climber down the mountain. All rescuers were out of the field around 9:00 p.m.

This mission is a reminder that the walls of the upper crater are unstable and that conditions can be very dangerous this time of the year, particularly in the morning as the sun warms the ice and rock. This mission also illustrates how long it can take for rescuers to reach a subject high on the mountain, even in good conditions and that helicopter evacuation may not be an option or may be delayed.

KATU, KGW and the Oregonian provided good coverage of the rescue.