The subject, a 23-year old woman who is a student at George Fox University, set out alone on Sunday March 24, 2013 at around 11:00 AM to climb Mt. Hood. She apparently did not leave a clear itinerary with friends who only knew that she might be spending a portion of her spring break hiking and climbing on Mt. Hood. She was wearing trail shoes and had only a plastic poncho for protection against wind and rain. She was not prepared to stay out over night. She ascended into deteriorating conditions above the Palmer lift, apparently became disoriented, and strayed far off course on the descent. She fell and hurt her leg that night and was unable to continue traveling the next day. She survived on snack food and water collected in her poncho until she was rescued on Saturday March 30, 2013..

Friends or family reported her missing on Thursday, March 28 and the Clackamas County Sherriff’s Office located her automobile in the Timberline Lodge parking lot that evening. The sheriff requested assistance from Portland Mountain Rescue the next morning, Friday, March 29.

That day, a team of six PMR rescuers swept the Zig Zag Glacier below 8500 feet and cut for sign in Little Zig Zag Canyon and Sand Canyon. A team from Pacific NW Search and Rescue (PNWSAR) searched the Timberline Trail south and east to the White River Snopark. A fixed wing aircraft from the Hood River County Sherriff’s Office conducted an aerial search and spotted possible tracks on the Reid Glacier that could be searched the following day. Search efforts were suspended shortly after dark on the 29th. 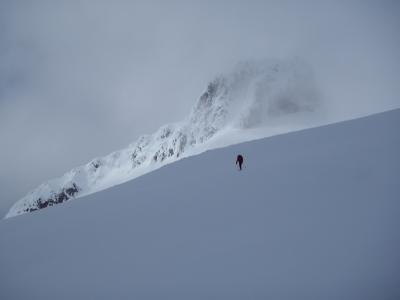 Four PMR rescuers were back in the field around 4:00 a.m. Saturday morning. A snow cat carried them to the top of the Palmer Lift. From there, they headed toward the summit to search the upper south side climbing routes. By 7:00 a.m., eight more PMR rescuers along with rescuers from the PNWSAR, Crag Rats, American Medical Response, US Air Force Parajumpers, Corvallis Mountain Rescue, and Eugene Mountain Rescue joined the search. Teams were dispatched to check the upper, lower and the western areas of White River Canyon, Illumination Saddle, terrain west of Mississippi Head down to Paradise Park and sections of the Timberline Trail. 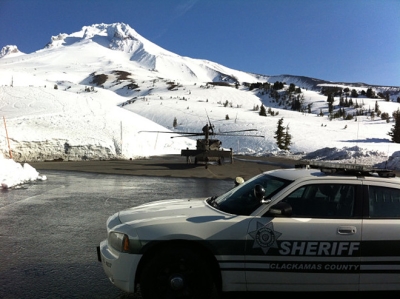 Around 9:00 a.m., an Air National Guard Blackhawk helicopter arrived. After a quick briefing, the helicopter headed directly to the Reid Glacier to investigate the tracks spotted on Friday. They followed the tracks down the mountain below tree line where they spotted the subject at around 4800 feet elevation (marked on the map below). They hoisted her into the helicopter and transported her to Legacy Emanuel Medical Center in Portland. In television interviews, the subject reported that she suffered frost bite to her feet and had deep lacerations on one leg. 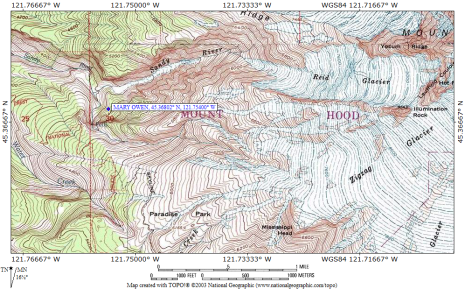 During this mission, the media reported that the Clackamas County Sheriff’s Office was unable to locate a climber’s registration form that the subject completed and filed in the climbers registry at the Timberline Day Lodge. Apparently, the US Forest Service Ranger responsible for the climber’s registry removed out-of-date forms (including the subject’s) from the file earlier in the week. Although climbers are asked to return to the registry to check out after their climb, few do. Therefore, the rangers assume that the many older registration forms that accumulate at the registry are for folks who made it home, but did not check in. These forms are filed for later compilation of statistics on mountain use. After this mission was over, the Forest Service located the subject’s registration.

Also, the subject reported that she was surprised that no one started searching for her when she did not return at the time she estimated on her registration form. As posted in the climber’s registry, no one monitors these forms, and there is no system to identify overdue climbers or to trigger a rescue. All back country users should leave an itinerary with a responsible adult. This subject survived six nights in rough, snow-covered terrain. Fortunately, weather was unseasonably mild that week. PMR urges back country travelers to carry equipment appropriate for the conditions and their objective and to build appropriate skills before climbing in technical terrain.