A 27 year-old male attempted the Devil’s Backbone trail, which is not maintained and not shown on current maps. He went off trail and lost his way in steep terrain near Rock of Ages and called for assistance around 3:30 in the afternoon on May 7. Multnomah County Sheriff Search and Rescue (MCSSAR) responded.

The subject was in periodic contact with sheriff deputies until late evening when his cell phone battery died. Three MCSSAR searchers thought they might have heard his shouts Saturday evening and decided to bivouac over night on the ridge near the point of possible voice contact.

Due to the steep terrain, the deputies put Portland Mountain rescue on standby Saturday night and eventually asked PMR to respond by 5:00 Sunday morning. PMR sent three teams (8 rescuers) up the ridge before dawn with ropes and rigging.

Around 6:30 the subject managed to get another call out to the deputies and reported information on his position. The deputies instructed him to stay put. The MCSSAR team that was already on the ridge located him shortly afterwards. They found him in good shape and able to travel under his own power. MCSSAR helped the subject back to the ridge. In heavy rain, the steep, unmaintained trail was dangerous. The PMR crews set up ropes for rappels and hand lines to safely descend to Horsetail Falls. Everyone was out of the field by 9:30.

Anyone can lose their way in the back country, but you can reduce the risk with simple precautions. PMR encourages all hikers to learn about the area and conditions in which they will be traveling and to carry map and compass, and GPS as a backup, especially when hiking off trail or on unmaintained trails. Prepare for the worst and carry emergency shelter, insulation, extra food, water, flashlight and fire starter for an unplanned overnight. And also we hope you’ll carry a reliable means of emergency communication, such as a personal locator beacon or a SPOT unit. 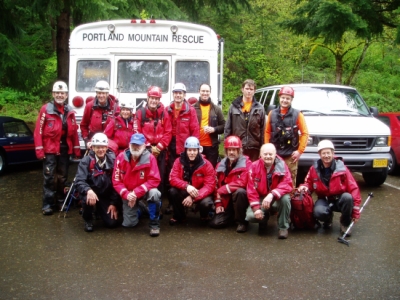