The two subjects for this mission started their adventure Saturday morning, leaving the Tilly Jane trailhead near Cooper Spur ski area and spending the night at the stone hut near the Timberline trail above Cloud Cap. Their intended climbing route was the challenging right gulley of the Elliot Headwall. Climbing slower than they had planned, they arrived on the summit about 5 pm Sunday. They had left their bivy gear at the hut and planned on descending Cooper Spur. With a storm then in full force, they opted to not descend that direction but instead head for Timberline Lodge down the Old Chute. After having difficulty finding the Old Chute, they found the Pearly Gates and made it down to the Hogsback and onto Crater Rock. Although they had a compass, altimeter and map and had a correct bearing, they soon became disoriented due to extreme conditions.

Sometime late morning on Monday they finally found their way down Big Zig Zag Canyon and intersected the Timberline Trail. Correctly turning east they proceeded to the West Rim of Little Zig Zag Canyon where they lost the trail. After wandering for some time in the upper Sand Canyon area, they returned to where they had lost the trail and called the sheriff. The Deputy advised them to hold their location and that help was on the way.

PMR received the call out at 7:00 pm. By 9:30 PMR had its first team at Timberline Lodge. By a little after 10:30 pm, PMR had 12 rescuers ready to go. The first team left shortly behind the PNWSAR and AMR Reach and Treat hasty team. The subjects were located very close to where their cell phone ping had located them–about one and one half miles west of the lodge on the west side of Little Zig Zag Canyon right on the Timberline Trail. A back-up PMR team stayed at Timberline Lodge in case more gear or a litter was needed.

The subjects were wet and cold but otherwise in good shape. With some dry clothes, warm drink and some calories they were able to move on their own, arriving back at the lodge about 11:45 pm.

Attached below is a map that the subjects composed after returning (click image for larger view), which they believe is close to their track of south side wanderings. The last loop is what they think they did after they lost the trail and kept looking for the Lodge, ending up back where they lost the trail. 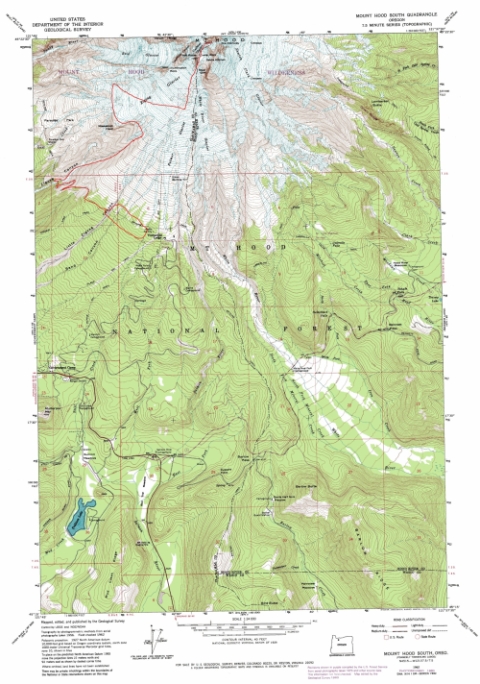