PMR assisted in the search for a missing snowboarder at Timberline Ski area on May 1st, 2010. Subject was a 29 year-old male last seen riding out of bounds around mid-day. The subject was wearing warm clothing, however had no food or water. He also did not have his cell phone.

After searching the out of bounds area (Sand Canyon) searchers followed a board track that eventually led to the subject’s abandon snowboard and a set of boot tracks. The boot track was followed for several miles, along the way finding the subjects dropped gloves.

Searchers found the boarder resting below a fir tree. He was jubilant, cold, hungry and dehydrated. The boarder reported that he had spent the night under the tree and had not had the energy to set out again in the morning. He had tried unsuccessfully to start a fire. His clothing was wet and had symptoms of mild hypothermia.

Rescuers provided food, water, dry clothing and helped the subject walk out to the trail were an ambulance was waiting. PMR encourages all outdoor enthusiasts traveling out of bounds to know the route and be prepared for unexpected weather, terrain, and navigation problems. Having adequate survival training to spend the night out in the wilderness is strongly recommended when traveling in the backcountry.

At 3:00 PMR received a request to assist in the search for an overdue hiker in the Gorge. The subject was a 60 year old male who had planned a solo hike to Wauneka Pt (2440′. Due to difficulties encountered on the route he related that he would continue south on the ridge to Nesmith Point, then on to his car.

PMR teams followed the subject’s ascent route as well as the proposed alternate route. Eventually, the subject regained cell service and called his wife with an updated location. The hiker was in the process of retracing his tracks because he had been unable to locate the necessary trails in knee-deep snow. He was in good shape, well-equipped and been able to build a fire overnight. PMR was able to locate the subject and escort him down.

Gorge weather conditions change rapidly. It is important to research the weather, current conditions, and route before entering the wilderness. PMR always recommends traveling with a partner and having a back-up plan in case problems arise.

Around midnight on April 9th, PMR was dispatched to assist in the search for a missing 43-year-old male skier who reported by cell phone that he was lost in the woods near Ski Bowl. The subject had apparently called his wife and a friend prior to contacting 911. Subsequently, his cell batteries died.

PLuckily, the subjected was located quickly. The key to the quick resolution of this mission was the ability of cell company technicians to zero in on the pings from the subject’s calls. Initially confidence was low, but by 5:00am they were able to get a fix within about 600′. Shortly after a team on snow machines made contact with the subject. (See map below for subject’s location) The skier was uninjured and in good shape. When skiing out of bounds, PMR encourages outdoor enthusiasts to always know the route, conditions and be prepared for backcountry travel. 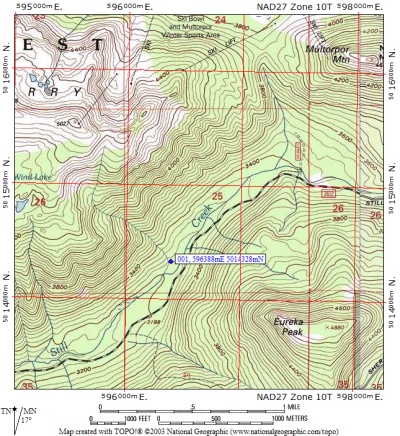 At 03:45am on Thursday, 3/25/10 PMR received a request from the Multnomah County Sheriff’s Department to assist in the search for an overdue 49 year-old male hiker. Kerry Friesen’s car had been located at Tanner Creek trailhead after he was reported missing by his parents around 6:00pm Wednesday.

PMR began assembling around 6:00am at the trailhead. Three teams of three from PMR were tasked with sweeping the Eagle Creek/Tanner Creek loop, the Ruckle Creek-Benson Plateau-Eagle Creek loop and the trail to Munra Point.

Around 11:00am, a PMR team encountered the subject traveling north on the Eagle Creek trail at Tunnel Falls. The PMR team got the subject into dry clothes, fed him and evaluated his condition. He was deemed fit to travel. The PMR team had been unable to make any radio contact with base or other teams for some time due to the configuration of the canyon. A broken message from them indicating that the subject had been found, was ambulatory and they were heading out was received by a second PMR team on Ruckle Ridge and relayed to base. Team 2 returned to the Eagle Creek trailhead and hiked up to meet Team 1 on their slow descent. The subject was delivered to the trailhead at around 2:00pm.

Information received from Mr. Friesen indicate that he left his car at 9:30am Wednesday after eating a snack. His intention was to do the Eagle Creek/Tanner Creek loop. Mr. Friesen ascended Eagle Creek but lost the trail in snow and blow-down at the southern end of the loop. Mr. Friesen claimed to have crossed Eagle Creek a number of times in an attempt to find the route. He carried a cell phone, and a lighter which he used to start a small fire to keep him warm overnight.

PMR encourages all outdoor enthusiasts to follow these four elements of safety. Know the Conditions, Know the Route, Be Prepared, Have a Backup Plan.

PMR received a request at 6:00 AM from the Skamania County Sheriff for assistance in the search for 24 year old female identified as Katherine Huether. The subject had been missing since 3/4 but a formal missing persons report was not filed until 3/6. Formal search efforts began on 3/7.

Search efforts were extensive, employing dog teams, equestrian teams, ATVs, ground searchers and Coast Guard Helicopters. The only clue discovered was found by a hiker on March 8th: A credit card receipt with the subjects name was found at the 1200′ level on a road which traverses Greenleaf Creek east of Table Mountain. The Sheriff indefinitely suspended the search on March 10th.

On March 13th, the body of Katherine Huether was found at the base of the east face of Table Mountain. Injuries were consistent with a long fall.