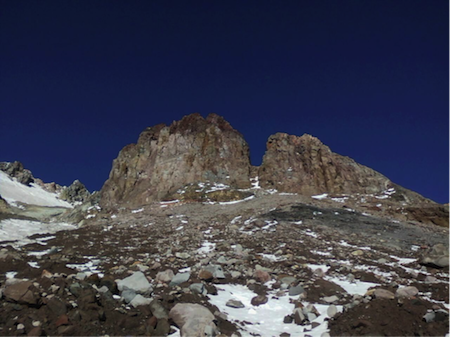 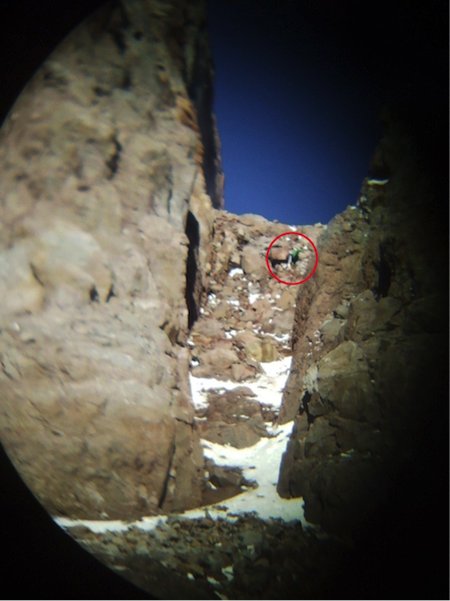 On June 1, 2014, three friends summited Mt. Hood in favorable conditions. On the descent, one of the of climbers, a 36 year-old woman, was overcome with severe abdominal pains. As they descended to the east side of Crater Rock, the pain was too severe for her to move further. Her companions called 911 for emergency assistance. At approximately 11:00 a.m., the Clackamas County Sheriff’s Office requested Portland Mountain Rescue to mobilize and evacuate the climber. The CCSO also requested AMR to send its reach and treat team to provide emergency medical care.

Two AMR medics departed Timberline Lodge at approximately 1:30 p.m. The first PMR team of six rescuers left Timberline 15 minutes later with equipment for the evacuation. A second PMR team of 3 rescuers left Timberline Lodge around 2:30 p.m. AMR reached the patient first around 3:45 p.m. and administered emergency care to stabilize her. PMR had the patient packaged and ready to move around 4:30 p.m.

Using a rope belay from snow anchors, PMR rescuers lowered the patient approximately 750 vertical feet. From there, they were able to guide the litter without the need for a rope belay. Due to excellent conditions, PMR delivered the patient to a snow cat at the top of the Palmer lift in only 30 minutes. The snow cat carried the patient to Timberline Lodge where she was loaded into an ambulance for transport to a Portland hospital around 5:45 p.m. She was released from the hospital later that day and has made a full recovery.

This mission is a great reminder that medical emergencies can happen at any time and any place. PMR urges backcountry travelers to always be prepared with food and shelter to survive for at least 24 hours. In this case, the patient was evacuated quickly in less than seven hours. Typically, evacuations from the crater area of Mt. Hood take more than eight hours from the time help is requested. Evacuations from more remote areas or in poor conditions can take much longer.

At approximately 3:30 p.m. on November 28, 2012, the Clackamas County Sheriff’s Office requested PMR to respond to a climber stranded in white out conditions near Crater Rock on Mt. Hood. The sheriff had been in cell phone communication with the subject and reported that he was uninjured, but cold and wet. The subject was unable to navigate safely from his location. The sheriff was able to provide GPS coordinates from the subject’s cell phone call to 911, which located him near the base of the south side of Crater Rock at around 10,000 feet elevation.

Thirteen PMR rescuers assembled at Timberline Lodge and boarded a snow cat around 6:30 p.m. The snow cat was able to transport them to the top of the Palmer Lift at approximately 8600 feet. The teams were greeted by 50 mph winds, heavy snow fall and rime ice conditions (fog that freezes to form a layer of ice on everything, including rescuers and their gear). In these conditions, a hasty team traveling light and fast proceeded to the area of the GPS coordinates. A second group consisting of two teams followed carrying first aid supplies, a litter and ropes and other technical gear.

After several hours of searching in very difficult conditions, the PMR teams had not located the subject. Visibility was poor–at times 4 feet or less–and wind muffled their shouts and whistle blasts. The PMR teams searched the area below Crater Rock, the Hogsback and Devils Kitchen without making contact with the subject.

During this time, cell phone communications with the subject were lost. The subject had been taking calls from friends, texting with the sheriff and friends and posting on Facebook. His battery eventually gave out.
Finally, around 11:45 p.m., there was a brief improvement in conditions with increased visibility and lower winds. During that interlude, PMR rescuers made voice and visual contact with the subject and reached him quickly. They gave the subject warm drink and completed a short medical assessment. They determined that the subject could walk out with assistance.

Still navigating in difficult conditions, they descended to the top of the Palmer lift and a waiting snow cat around 1:30 a.m. All teams were out of the field at approximately 2:00 a.m.

This was a challenging rescue due to the very difficult mountain conditions. PMR encourages climbers to conservatively interpret weather forecasts and not to climb into approaching storm systems. All climbers should be prepared for conditions to suddenly deteriorate; they should carry compass, map and GPS and be proficient with navigation in difficult conditions.

The subject’s cell phone was an important factors in this rescue. Climbers, however, should not depend on cell phones, due to limited back country reception and because cell phones are not designed to function in extreme environments. When back country travelers needing rescue have functioning cell phones, they should carefully preserve battery charge by keeping the cell phone warm in their parka and should use it only for essential communication or navigation functions. Text messages consume far less battery charge than voice calls or internet use, and text messages often can be transmitted even when a voice connection cannot be established. 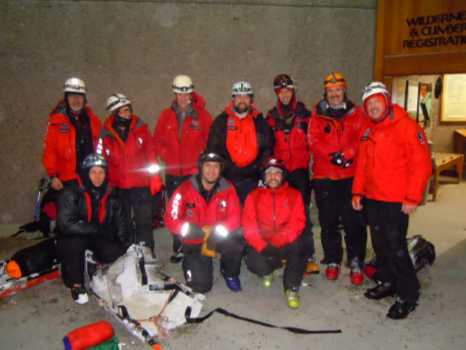 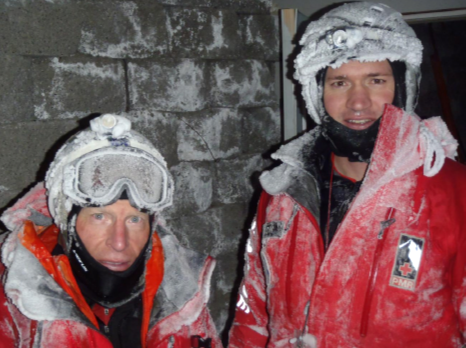 Clackamas County Sheriff’s Office contacted PMR shortly after noon on February 5, 2012 requesting assistance to evacuate an climber on the south side of Mt. Hood below Crater Rock. Apparently, the climber lost her footing on steep, icy terrain. She lost her ice ax as she fell and was unable to self-arrest, until she came to rest several hundred feet lower. She had fallen behind her climbing group, and they were not aware of her fall. Other climbers came to her assistance.

The patient sustained injuries that prevented her from climbing down on her own. Timberline Ski Patrol and AMR were first on the scene. They stabilized the patient and provided emergency medical care. They requested PMR’s assistance in evacuating the patient.

A team of seven PMR rescuers loaded into a Timberline snow cat at 3:45 p.m. with litter and other equipment to lower the patient to the Palmer lift area. Based on the patient’s location and conditions, they were able to walk the litter down to the top of the Palmer lift without the use of ropes or other technical gear. A snow cat carried her the rest of the way to Timberline Lodge where she was transferred to an ambulance at 7:15 p.m.