It was the falling boulders that worried Erik Broms most.

The 59-year-old Portland Mountain Rescue team member figures he’s climbed Mount Hood 200 times, but even he described the conditions as bad during the first days of searching for a climber who’d gone missing that weekend….

Kinley Adams, 59, did not return from a Mt. Hood climb on June 22, 2013 when expected by his family. Mr. Adams had intended to climb the Leuthold Couloir, which is a challenging, but popular route up the west side of the mountain. Under the direction of the Clackamas County Sheriff’s Office, search teams searched the mountain for Mr. Adams from June 23 through June 29. Searchers in a helicopter spotted his body at the top of the Sandy Glacier on June 29. Apparently, Mr. Adams lost his intended route, crossed Yocum Ridge and made his way into a very steep and dangerous area of the Sandy Glacier headwall to the north. There he either fell or was hit by falling rocks or ice. Rescuers recovered his body on June 30.

From the beginning, the search effort was hampered by difficult weather and snow conditions. Beginning on Sunday, June 23, winter storm conditions prevailed on the upper mountain with a snow level around 9000′. Rain soaked the snow at elevations below 9000′. Visibility was poor and wind and precipitation made travel on foot difficult and aerial searching impossible. By mid-week, snow conditions became dangerous with wet snow avalanches occurring throughout the area above 9000′. Due to these conditions, mountain rescue search teams concentrated their efforts below 9000′, especially on the Reid Glacier, for most of the week. On June 23, one Portland Mountain Rescue (PMR) team climbed the Leuthold Couloir to the neck of Hour Glass, but retreated due to poor visibility and unstable snow conditions; they found no clues. The weather and snow conditions remained poor through Thursday evening June 27 when the clouds finally lifted. On Friday June 28, mountain rescue teams climbed to the Hog’s Back on the standard south side route and into the upper Reid Glacier to assess conditions there. They confirmed the prediction that the warming trend made the recent wet snow even more unstable which kept ground teams off of the upper mountain that day.

When the weather finally broke late Thursday, June 27, visibility improved enough for aerial searching. The Oregon Army Guard flew searchers over the Leuthold Couloir route that evening, but no clues were observed. Late in the week an individual who had climbed the Leuthold Couloir the same day as Mr. Adams reported to the Sheriff that he had observed a single set of crampon tracks and a headlamp veering north off the route toward Yocum Ridge early in the morning on June 22. On this information, aerial searching concentrated on the upper portions of the route, Yocum Ridge and then the Sandy Glacier Headwall. Clear weather on Friday and Saturday allowed thorough aerial searching of the upper mountain. On Saturday afternoon, a helicopter team spotted a body presumed to be Mr. Adams on the upper Sandy Glacier. The body was located around 8400′ in a hazardous area of heavy rock fall and was surrounded by rock debris. The remainder of Saturday was devoted to planning a safe means of recovering the body.

On Sunday, June 30, 10 PMR rescuers and two American Medical Response (AMR) Reach and Treat medics left the Top Spur Trailhead around 3:00 a.m. The teams split at McNeil Shelter, with one team of seven PMR rescuers assigned to ascend the Sandy Glacier to the body. The second team including three PMR rescuers and the two AMR medics climbed Cathedral Ridge to scout the most efficient route off of the glacier.

The glacier team traveled up the middle of the glacier in safe areas free of rock fall while skirting the open crevasses. They established a staging area around 8200’ where they assessed the rock fall and other hazards in the chute where the body lay. The rock fall was minimal at that hour so the decision was made to attempt the recovery. A rope team of three rescuers ascended to an area that was level with the elevation of the body and adjacent to the rock filled chute. The remaining four rescuers scanned the slopes above watching for any falling rocks or ice. The team of three set an anchor from which two rescuers dashed into the higher risk area and packaged the body in a portable plastic litter called a Sked. They quickly moved out of the area as the package was pendulumed from the anchor manned by the third member of that rope team. Once back at the safe area, the full team packaged the body more carefully for the journey down the mountain.

Meanwhile, the Cathedral Ridge team located a saddle on the ridge and found a safe and efficient route from there down the Glisan Glacier to the Timberline Trail. Once the glacier team had lowered the package down and across the Sandy Glacier, the ridge team raised it to the saddle and over the ridge. They then lowered it to the Glisan Glacier on the north side of the ridge. They lowered the package down the glacier to Timberline Trail. There they transferred the package to a large team from Pacific Northwest Search and Rescue. Pacific Northwest Search and Rescue completed the arduous task of carrying the package over five miles of snow-drifted and rocky trail to the trail head. The PMR teams were out of the field around 4:00 p.m. The package was delivered to the trail head around 7:00 that same evening.

This eight-day search and recover effort required many hours from committed rescuers and support staff, many of them volunteers. PMR rescuers logged 639 hours in the field. The responding teams and agencies included:

The upper parts of Mt. Hood and other Cascade volcanoes involve complex and dangerous terrain in which a climber easily can lose their route. PMR encourages climbers to:

For any venture into the back country, hikers and climbers need solid navigation skills and should carry and know how to use map and compass to stay on route. Mr. Adams was carrying a cell phone, but it was turned off or damaged and could not be pinged to help identify his location. He was not carrying an emergency communication beacon, but the nature of his injuries suggest that he would not have been able to activate such a device once disaster struck him. This mission illustrates the difficulty of finding a missing person in the back country when they do not have the ability to communicate their location. 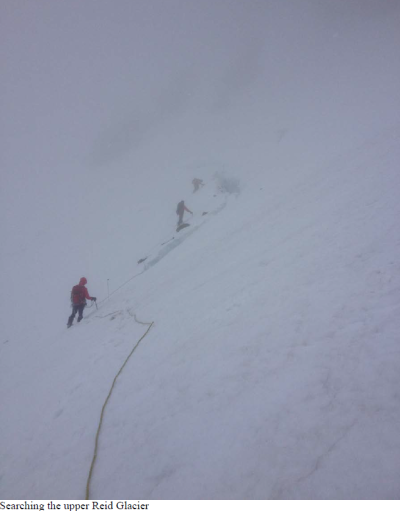 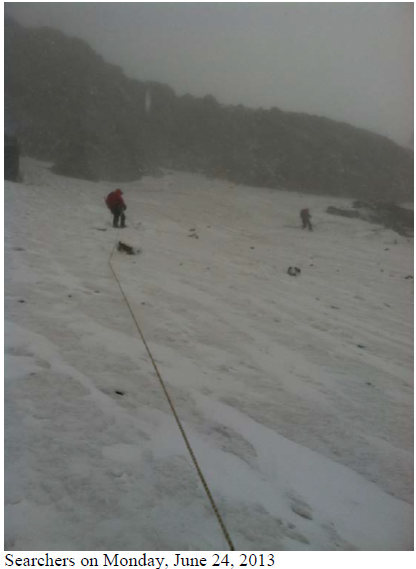 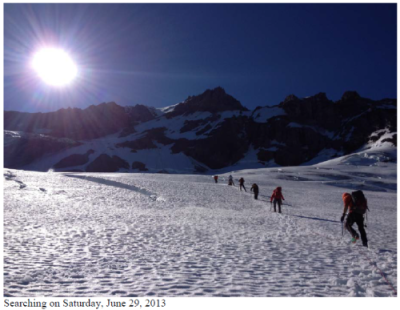 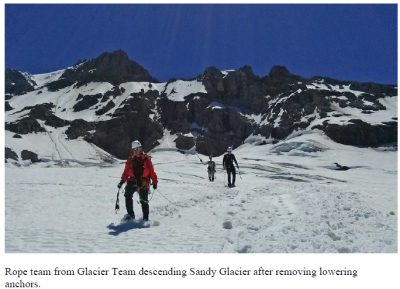 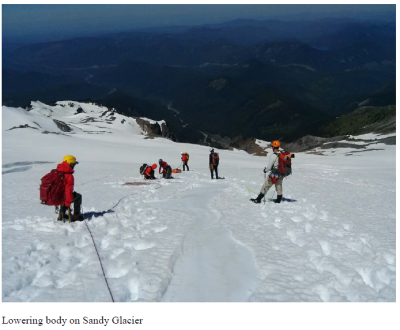 At the request of the Multnomah County Sheriff’s Office, Portland Mountain Rescue assisted with the investigation and recovery of a vehicle reported to be far over the edge of the Columbia River Highway near Crown Point. A team of 16 PMR rescuers set up a rope system and lowered a rescuer to investigate the vehicle which was found to contain a deceased person. PMR rescuers cleared obstacles for extraction of the vehicle. They then ferried the cable from a crane down the cliff and attached the cable to the vehicle. The crane drug the vehicle up several hundred feet to the highway. The matter is the subject of further investigation by law enforcement officials.

Clackamas County Sheriff’s Office contacted PMR at approximately 4:30 p.m. on February 6, 2012 requesting assistance to search for an overdue climber on the south side of Mt. Hood. The climber, 31 year-old Jared Townsley was climbing alone up the south side, starting at about 1:00 a.m. on February 6. He was reported overdue by his brother. Interviews by the Sheriff’s office of other climbers on the mountain that day indicated that he had been last seen descending around the base of Crater Rock at about 8:30 a.m.

PMR fielded a hasty team of three rescuers who boarded a snow cat around 7:45 p.m. to the top of the Palmer lift. They first searched the upper Zig Zag west toward Illumination Saddle and below west Crater Rock. They then proceeded to the main climbing route on Triangle Moraine and proceeded up to the Hogs Back at 10,500’ and into the west crater.

PMR’s second group of rescuers left Timberline Lodge around 10:00 p.m. and staged rescue supplies at the top of the Palmer lift. They split into two teams. Team 2 searched the west rim of White River Canyon above 8500’, including checking large crevasses on the White River Glacier. Team 3 searched the Zig Zag above 8500’.

The three teams converged around 1:15 a.m. on February 7 to develop new assignments. Team 1 then descended along the west rim of White River Canyon. They descended to Timberline Lodge and were out of the field around 3:30 a.m. Teams 2 and 3 completed sweeping the area above the Palmer lift and then rested in the Palmer Lift building until first light. They recommenced search efforts at 5:45 a.m. and proceeded to White River Canyon. They split into two teams again to search the east and west edges of the glacier. Team 3 climbed to the upper bench of the glacier where they encountered the subject’s body below Steel Cliff at approximately 8:00 a.m. It was immediately apparent that the subject had suffered traumatic injuries and was deceased.

Communications were handled by Mountain Wave throughout the night and morning. Additional rescuers from PMR, the Crag Rats and Corvallis Mountain Rescue were entering the field when the body was first discovered and ultimately were not deployed.

Back country fatalities are always tragic for families, friends and rescuers. PMR urges back country users to travel with a buddy. We also urge climbers to be aware of the heightened dangers that winter conditions create in the Cascade Mountains. Self-arrest can be impossible on even moderate slopes when they are glazed with ice. Put crampons and ice axes into use before you need them. Don’t venture onto a slope where self-arrest is uncertain unless you are roped to a proper anchor as a backup. Be safe out there.

The Multnomah County Sheriff’s Office requested our assistance in a search for a possible suicide victim in the vicinity of the Vista House in the Columbia Gorge. The subject’s car had been parked in the area for several days.

On the morning of July 30, 2011, PMR searchers descended from above to investigate colorful objects observed from above. They quickly located a woman’s body accompanied by a small dog. The PMR team packaged the body in a litter and used rope systems to haul it up a steep incline and finally a vertical section. The team then calmed and rescued the dog.