On Saturday, July 11, 2015, a party of three hikers set off at 3:00 PM on a challenging hike in the Gorge, using trails that are not maintained. After scrambling up a route known as Elevator Shaft, they lost their way. They were reasonably well prepared with headlamps, extra food, water and clothing however they did not bring a map which might have helped them find a maintained trail. They were able to see the Columbia River below them and they decided to descend. They got into steeper and steeper terrain and, although they had headlamps, they made the wise decision to stay put for the night.

When they were still unable to find their way Saturday morning, they got a call out on their cell phone to a relative who called 911. Using pings from the cell phone, deputies from the Multnomah County Sherriff’s Office were able to obtain an approximate location for the group. A Hood River County Search and Rescue plane was then able to spot them from the air and advise searchers on the best way to reach them. When they heard the plane in the area the hikers scrambled to an open area and waved clothing which allowed the pilot to see them. The pilot dipped his wings side to side signaling that he saw them which raised the hiker’s spirits.

Because the hikers were lost in very steep terrain, the deputies contacted Portland Mountain Rescue (PMR) around 8:00 a.m. As requested, PMR deployed a small team of two rescuers who arrived at base with ropes and other climbing gear. They joined a team of six searchers from Multnomah County Search and Rescue (MCSAR) and headed to a point on Trail 400 below the hiker’s coordinates. From there, they proceeded to bushwhack up through steep terrain and moderate brush. After about an hour of climbing, the PMR rescuers made voice contact with the subjects following a whistle blast.

The trio was in good spirits, which the rescuers attributed to their preparedness (extra food, clothing and water). One of the subjects had an ankle injury, but they determined she could be evacuated down the steep terrain without a litter, which would have been a much longer and more arduous process.

The rescuers proceeded to rig ropes for the descent and outfitted the hikers with helmets and harnesses. They rappelled down the steepest terrain and eventually met the other searchers from MCSAR. Meanwhile, a third PMR rescuer and additional rescuers from MCSAR brought additional ropes and a wheeled litter up Trail 400. The PMR rescuer rigged ropes for the lower part of the descent as hand lines. Once the party reached Trail 400 around 2:30 p.m., they loaded the injured hiker into the litter and wheeled her the rest of the way out. All rescuers were out of the field around 3:15 p.m.

The Multnomah County Sherriff’s Office frequently calls PMR to assist hikers who have become lost in steep areas of the Columbia Gorge. PMR reminds hikers that vertical cliffs and very steep, loose terrain are common throughout the Gorge. Maintained trails allow relatively safe passage through the cliffs, but traveling on old trails or cross country can lead hikers into areas where the route is not clear and the terrain is unsafe. We encourage you to know your route and stay on it, bring a map and compass and know how to use them. If ever you are unsure of your location, retrace your steps to a known point rather than wandering ahead in hopes of a lucky break. And like these hikers, be prepared with extra food, clothing and shelter.

On June 1, 2014, three friends summited Mt. Hood in favorable conditions. On the descent, one of the of climbers, a 36 year-old woman, was overcome with severe abdominal pains. As they descended to the east side of Crater Rock, the pain was too severe for her to move further. Her companions called 911 for emergency assistance. At approximately 11:00 a.m., the Clackamas County Sheriff’s Office requested Portland Mountain Rescue to mobilize and evacuate the climber. The CCSO also requested AMR to send its reach and treat team to provide emergency medical care.

Two AMR medics departed Timberline Lodge at approximately 1:30 p.m. The first PMR team of six rescuers left Timberline 15 minutes later with equipment for the evacuation. A second PMR team of 3 rescuers left Timberline Lodge around 2:30 p.m. AMR reached the patient first around 3:45 p.m. and administered emergency care to stabilize her. PMR had the patient packaged and ready to move around 4:30 p.m.

Using a rope belay from snow anchors, PMR rescuers lowered the patient approximately 750 vertical feet. From there, they were able to guide the litter without the need for a rope belay. Due to excellent conditions, PMR delivered the patient to a snow cat at the top of the Palmer lift in only 30 minutes. The snow cat carried the patient to Timberline Lodge where she was loaded into an ambulance for transport to a Portland hospital around 5:45 p.m. She was released from the hospital later that day and has made a full recovery.

This mission is a great reminder that medical emergencies can happen at any time and any place. PMR urges backcountry travelers to always be prepared with food and shelter to survive for at least 24 hours. In this case, the patient was evacuated quickly in less than seven hours. Typically, evacuations from the crater area of Mt. Hood take more than eight hours from the time help is requested. Evacuations from more remote areas or in poor conditions can take much longer. 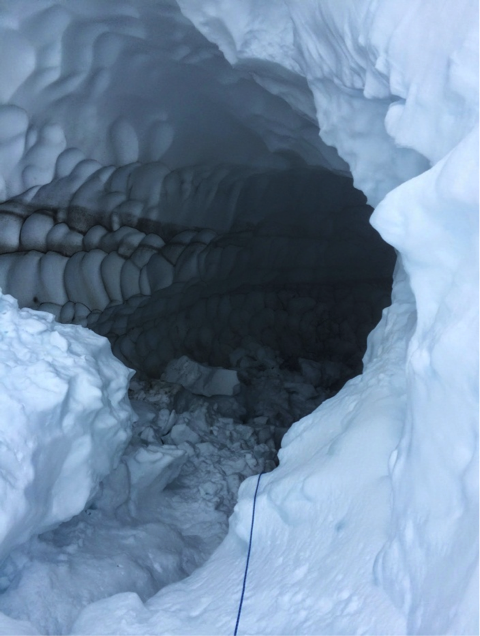 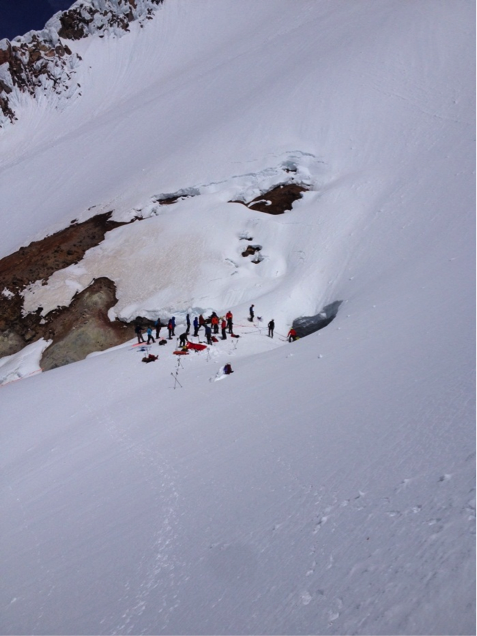 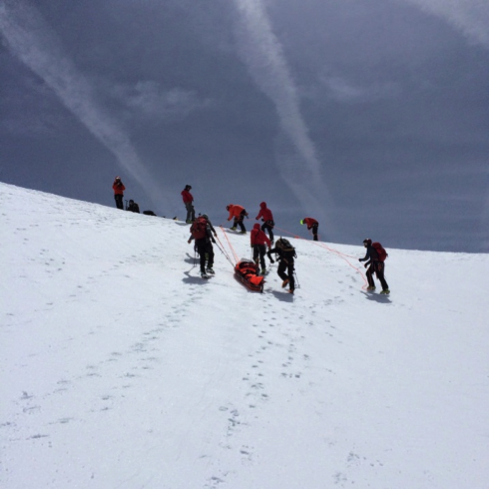 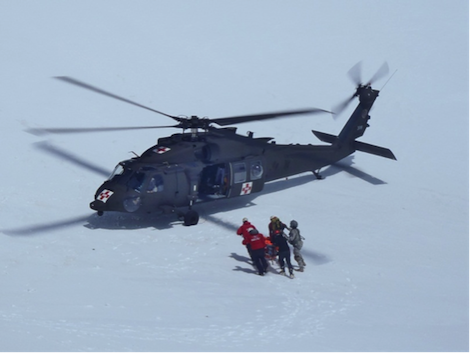 Hikers in the Oneonta Gorge area on Sunday called 911 because they could hear a dog barking from the base of the 100-foot cliffs surrounding Triple Falls. Multnomah County deputies were concerned that a person may have fallen down the cliff and their dog was with them. At least one similar tragedy had occurred several years ago in the same location. The Multnomah County Sheriff’s Office contacted Portland Mountain Rescue and asked PMR to search the cliffs for a possible human subject

Around 3:30, PMR rescuers encountered a distraught dog owner on the trail near the falls. She reported that her dog Rocky had fallen off the cliff the day before. She and friends had returned Sunday to search for Rocky, but they could not get to the bottom of the cliffs, and Rocky was no longer barking. Assuming the worst, she was headed home.

The rescuers proceeded to the overlook above the falls from which the dog had fallen and inspected the area from the tops of the cliffs by descending partway from the other side of the falls. Around 4:00, the deputy in charge concluded there was no human subject and terminated the mission. However, he gave PMR rescuers permission to continue on their own if they chose to do so. PMR elected to send one rescuer over the cliff as a training exercise.

Five minutes later, a wriggling, yapping Rocky cheerfully greeted Scott Norton as he rappelled to a ledge halfway down the cliff. Rocky had fallen to the ledge and stayed their more than 24 hours, confident that his humans would come for him. Eventually overcoming Rocky’s resistance, Scott stuffed Rocky into his pack and closed it tight for the journey back up the cliff. Using a two-rope system, rescuers hauled Scott and Rocky back up the cliff where he was reunited with his tearful owner.

Back at the trailhead, Rocky had a snack and passed out dog kisses to all the PMR rescuers. One rescuer commented that Rocky would probably forget the adventure by tomorrow, but would be terrified of backpacks for the rest of his life. Rocky’s owner says she’ll keep him on leash from now on. Happy holidays to all!